Background: It is a misconception among anesthetist that ilioinguinal (IIN) and iliohypogastric nerves (IHN) are purely sensory. For the first time in literature, we describe a technique for blocking IIN and IHN using peripheral nerve stimulator (PNS) in day case inguinal hernia surgeries.
Aim of the Study: The aim of the study was to evaluate the efficacy and safety of PNS guided IIN and IHN block in the transversus abdominis plane (TAP), supplemented with genitofemoral nerve (GFN) block for day case inguinal hernia surgeries.
Methods: Following Institutional Consent, 100 ASA-I and II adult patients listed for elective inguinal hernia repair were prospectively recruited for the study. IIN and IHN block was performed using PNS at a point 5 cm cranial and 5 cm posterior to the anterior superior iliac spine. We observed for the twitches in the lower abdominal wall and the inguinal region (T10-L1 territory). Data were collected for intraoperative pain, discomfort and conversion to general anesthesia (GA). Post-operative pain scores and post-operative complications were also recorded.
Results: The nerve block was deemed to be successful in 92% of the patients. In 8% of patients, conversion to GA was required. There was excellent analgesia postoperatively up to 12 h. All of the 92 patients were ambulatory within 4–6 h without any discomfort.
Conclusions: PNS guided IIN and IHN block in the TAP plane, supplemented with GFN block provides excellent anesthesia technique for day case adult inguinal hernia surgery. Use of PNS increases the success rate, safety and helps in locating the nerves in the TAP.
Keywords: Adult inguinal hernia surgery, Day care surgery, Eichenberger point, Ilioinguinal nerve, Iliohypogastric nerve, Peripheral nerve stimulator, Transversus abdominis plane.

The most common approach to the ilioinguinal (IIN) and iliohypogastric nerve (IHN) is either by landmark technique or under ultrasound (US) guidance. The failure rates are as high as 45–72% in landmark technique [1, 2].US definitely increases the success rates [3] but not very many people have access to US machines even in the developed world. Even those who have access to US machines, many may not have the expertise to perform US-guided IIN block. It is a common misconception among the anesthetists that IIN and IH are purely sensory nerves and hence, peripheral nerve stimulator (PNS) cannot be used for these blocks. In this paper, we describe a technique that allows for the use of PNS for IIN and IH blocks. Use of PNS would improve the success rate of IIN/IHN for hernia surgery.

Aim of the study

The aim of the study was to evaluate the efficacy and safety of PNS guided IIN and IHN block in the transversus abdominis plane (TAP), supplemented with genitofemoral nerve (GFN) block, and for day care inguinal hernia surgeries. Primary outcomes were failure (rate of conversion to general anesthesia [GA]) and any intraoperative discomfort. Secondary outcome was a pain at rest and movement in the post-operative period.

At this point, both the IIN and IIH lie under internal oblique (IO) fascia, the TAP. Rozen et al. in their recent work have confirmed this finding [5]. A Stimuplex needle (50.0 mm) (BBraun) was used for the block. The needle was inserted at the described landmark. Nerve stimulator was set at 1 mA, 0.2 ms, 2 Hz current and once the needle was through the IO fascia, we looked for the twitches in the lower abdominal wall and the inguinal region (T10-L1 territory). Current was then reduced to 0.5 mA, and 20 ml of 0.5% levobupivacaine was injected after repeated aspirations at every 5 ml aliquots. For the genital branch of GFN block, 4 ml of lignocaine with adrenaline subcutaneously infiltrated just above the pubic tubercle. Nerve blocks were assessed at 30 min using cold sensation and then to needle pricks. If patient felt cold and complained of pain to needle prick at 30 min in T10-L1 territory, the block was deemed to be a failure, and standard GA was administered. Those who did not feel the cold sensation and did not complain of pain to needle prick at 30 min were deemed to have a successful block and the surgery was allowed to proceed. The operating surgeon was asked to infiltrate the hernia sac during dissection with 2 ml of 1% lignocaine with adrenaline. Data were collected for intraoperative pain, discomfort and conversion to GA. Post-operative pain scores, time to ambulation and post-operative complications were also recorded. Pain severity in the postoperative period was assessed on a 10 mm visual analog scale (VAS), score of 0 being no pain, and 10 as the worst imaginable pain. VAS scores at rest and movement were recorded at 0 h, 2 h, 4 h, 6 h, 8 h, and 12 h. Analgesia was administered at a VAS score of 4 or greater, and on patient request. Paracetamol 1 g oral and diclofenac 75mg intramuscularly were the analgesia used in these cases. Statistical analysis was performed with GraphPad Prism6 for Mac.

There was no difference in demographic profile, duration of surgery and the ASA status (Table 1). In 92% (92 patients), block was deemed to be successful (Fig. 2).

Conversion to GA was required in 8% (8 patients) of the cases. In the “successful nerve block” patients, none (0%) complained of pain or discomfort during the surgical procedure. The surgeons, before any manipulation, electively infiltrated the hernia sac. Up to 12 h of excellent post-operative analgesia was achieved in all of the 92 patients, and they were able to ambulate within 4–6 h without any discomfort. There was no difference in VAS scores at rest and movement, when pain scores were compared at 0 h, 2 h, 4 h, 6 h, 8 h, and 12 h. VAS mean score (±standard deviation) was 1.142 (±0.3523) at rest whereas it was 1.495 (±0.4948) on movement. On satisfaction scoring, 86.95% (80 patients out of 92) rated it excellent,
11.95% (10 out of 92) rated it as good, and 2.17% (2 out of 92) only rated the
technique to be of poor quality (Fig. 3). In first 12 h of post-operative period, rescue analgesia was not requested by 90.21% (83 out of 92). Only 9.78% (9 out of 92) of the patients with “successful nerve block” requested for rescue analgesic and the request was at a mean of 4 h (Fig. 4). Five patients (5.43%, 5 out of 92 successful blocks), we found transient
diminished sensation over the upper 1/3rd and anterior medial portion of the
thigh but motor power was normal 5/5 (Table 2). It is probably due to spillage of LA through fascial planes used for
GFN,transienly blocking the femoral nerve in inguinal region.. 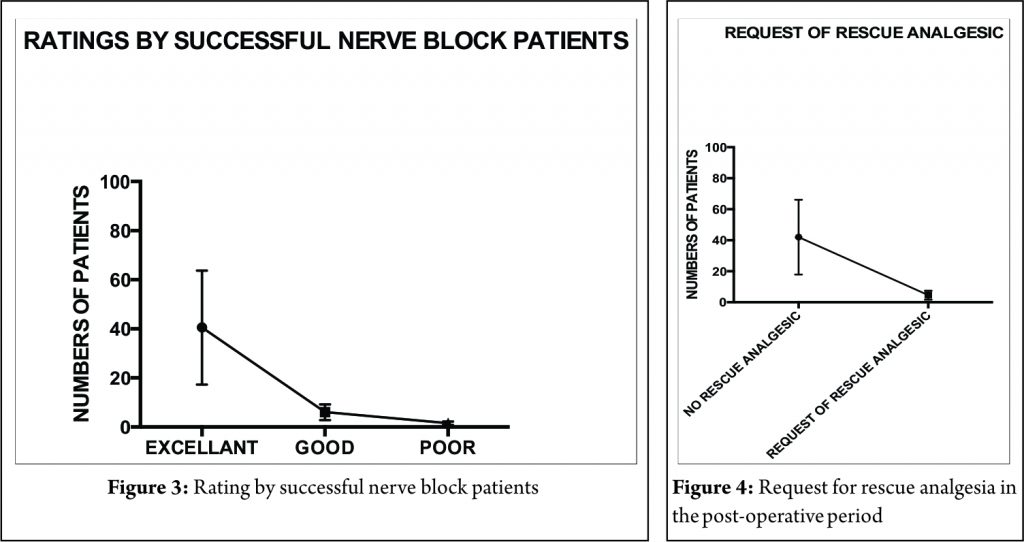 It is often believed by most anesthetists that the IIN and IHN are purely sensory and do not have any motor component. The IIN nerve supplies motor nerves to transversus abdominis and IO [6]. Therefore, PNS can be used for blocking IIN and IHN. The abdominal twitches that are obtained cannot be from direct muscle stimulation as we were able to get the twitches at as low a current as 0.4 mA. The landmark we have used in this study is based on a cadaveric study by Eichenberger et al. [7] and as described by the author [SKS] in his paper on the loss of resistance nerve blocks [4]. At this described point, both the IIN and IHN lie between the IO and transversus abdominis muscle. Jamieson and colleagues [8] dissected 244 human cadavers and found both nerves in more than 90% of cases between these two muscles in the region above and posterior to the ASIS. They suggested that this area is ideal injection point for nerve blocks and described this way back in 1952. Unfortunately, their findings were neglected, and none followed their suggestion. Almost 60 years following their observation we are again applying the knowledge and come up with an absolutely new innovative technique of using PNS for hernia blocks. Till now, the recommended landmark for this block is medial and anterior to ASIS. At this point, the IIN nerve with a higher frequency often penetrates the IO muscle and lie under the external oblique fascia. Anesthetists are often confused whether they need to feel for one or two “pops” at the landmark. Those who use “two pops” may encounter failure, as the LA may not reach the IIN. Hence, performing a “blind” technique with 20 ml of LA may be very insufficient to reach and block these two nerves if they are not placed in one compartment. This probably explains the high failure rates (45–72%) as described in the literature [1, 2]. If the IIN and IHN both lie in the same layer of the abdominal wall with high probability, the chances of success increase tremendously. At the point used in this study, according to Eichenberger [7], both nerves are usually not divided, and the nerves seem to be thick. Eichenberger reported 3 mm (2–4) and 2 mm (1.8–3.5) transverse diameter, respectively, for IIN and IH nerve at this point. Eichenberger also concluded that they have not observed any nerves medial or caudal to ASIS [7]. In our study, we have 8% failure rates. Our technique can be considered to be as effective as US-guided hernia blocks, which have reported failure rates of 4% [9]. Failures are expected as IIN and IHN have many anatomical variations, and some cadaveric studies have even reported the total absence of IIN nerve [10-13]. It is not surprising that in some cases no response to PNS may occur due to complete absence or variations. These variations may be responsible for nerve block failures when done blindly using landmark techniques. There are around 10 different origins of IIN and IHN have been described which may account for partial or complete failures [13]. Our technique based on Eichenberger and Jamieson studies clearly shows that it is possible to block IIN and IHN before their division and in a single compartment (transversus abdominis plane) of the abdomen with almost 90% probability. Interestingly, at this point of injection, both IIN and IHN are quite thick, and it is possible to stimulate these nerves using a peripheral nerve stimulator (PNS). From Eichenberger study, it is also very clear that the distance between the two nerves is <1 cm, therefore if we deposit 20 ml of LA at this point, it effectively blocks both IIN and IHN. This may be the reason for high success rates in our technique. To complete the analgesia and anesthesia for inguinal hernia surgery, GFN block is always required, and therefore, this nerve was blocked separately just above the pubic tubercle [14-16]. This is a first-ever study where PNS guided IIN and IHN blocks have been described for hernia surgery. In places where there is no access to US machines, this approach will provide a better alternative to blind blocks. Use of PNS increases the success rates of IIN and IHN from approximately 55% in landmark technique to more than 90%.

PNS guided IIN and IHN block in the TAP plane with GFN supplementation is an excellent anesthesia technique for adult inguinal hernia surgery. Use of PNS significantly increases the success rate, safety and helps in locating the nerves in the TAP. No significant adverse effects were observed during the study. 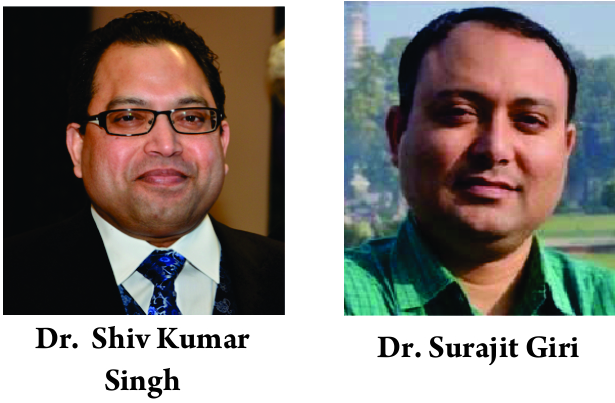