In clinical practice, serum L-lactate has become an important marker of prognosis and resolution of diverse critical illnesses, including sepsis and septic shock. The newly released Sepsis-3 criteria include serum lactate as diagnostic criteria for septic shock [1]. Here, we summarise current knowledge regarding the use of lactate in clinical practice and investigates the role of lactate in a post-SIRS era. D-lactate (an isomer of L-lactate) causes a distinct clinical entity of different aetiology which is not included here; henceforth, L-lactate will be referred to as lactate. Pyruvate is formed mainly (65%) from glucose via glycolysis, though a small amount (16-20%) is produced from metabolism of alanine (Figure 1) [2]. In the presence of oxygen and adequate mitochondrial capacity, pyruvate is then converted by pyruvate dehydrogenase complex to acetyl CoA, which enters the Krebs cycle and undergoes mitochondrial oxidative phosphorylation. In the absence of adequate oxygen or in the presence of excessive glycolysis, pyruvate is unable to undergo oxidative phosphorylation and is instead shunted into lactate by the enzyme lactate dehydrogenase.  Lactate is metabolised primarily (60%) by the liver through gluconeogenesis and oxidation. Under resting conditions ~5% of lactate is metabolised by the kidney; in hyperlactataemia the kidney metabolises up to 25-30% of lactate [3]. The remainder is metabolised by myocytes. Lactate accumulation may be associated with acidosis, especially at higher serum lactate concentrations; acidic conditions impair the liver’s ability to process lactate but increase renal lactate metabolism [3]. The acidosis associated with lactate is a high anion gap metabolic acidosis as lactate is an unmeasured anion. Elevated serum lactate is an indicator of production/consumption mismatch. The Cohen and Woods classification (Table 1) has long been used to differentiate between causes of hyperlactataemia, with type A representing causes due to decreased tissue oxygen supply and type B including all other causes. This classification belies the complexity of lactate pathophysiology, with multiple processes often present in one patient. Currently, two principle methods of serum lactate estimation are in clinical use. The lactate dehydrogenase (LDH) method in use by most laboratories relies on the spectrophotometric measurement on light absorption before and after addition of LDH, reflecting the amount of NADH formed as lactate is metabolised. The lactic acid oxidase method employed by most point-of-care (POC) devices (including iSTAT and Radiometer machines) uses amperometry to measure current produced by hydrogen peroxide formation (from lactate) at a platinum anode. The most significant error with the latter method is the false positive produced by glycolate, a metabolite of ethylene glycol. The lactate gap is the difference between the results of these two methods; an elevated lactate gap is suggestive of ethylene glycol poisoning [4, 5]. 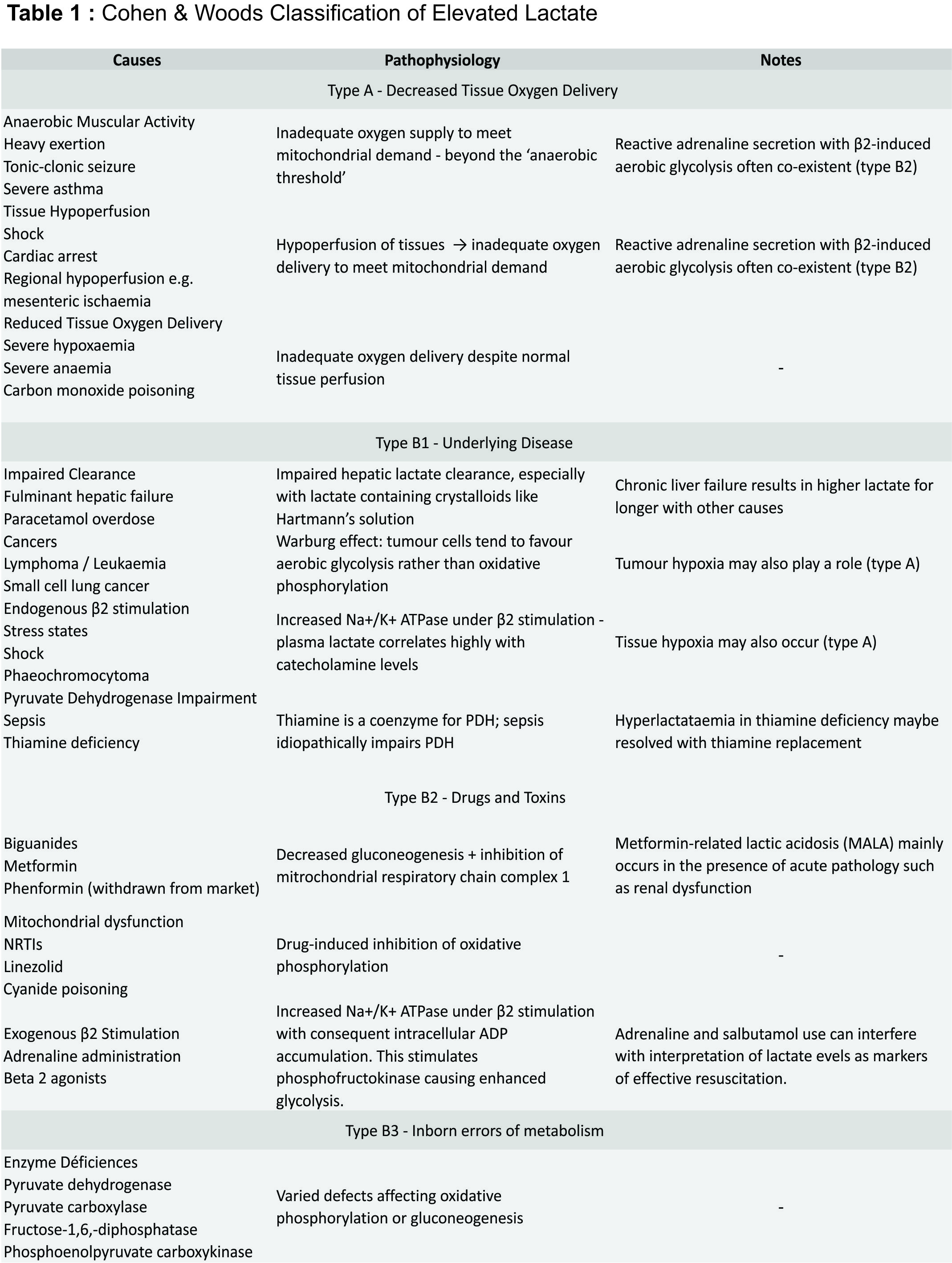 Lactate now makes up part of the definition for septic shock under Sepsis-3 [1]. These definitions reflect a change in the current sepsis paradigm, with removal of the SIRS criteria and the addition of the Sequential Organ Failure Assessment (SOFA) to quantify multiorgan dysfunction. Sepsis-3 also includes the quickSOFA criteria as a screening tool for sepsis. Septic shock under the new consensus definitions is the presence of sepsis (infection + SOFA ≥2), persistent hypotension requiring vasopressors to maintain MAP ≥65, and serum lactate >2mmol/L. Patients meeting these criteria have an estimated mortality of 42% [1]. Elevated lactate in sepsis has traditionally been attributed to anaerobic metabolism in the setting of macrocirculatory and microcirculatory dysfunction. Hypotension and hypoperfusion occur at a systemic level due to vasodilatation, while microcirculatory shunting occurs at a capillary level due to arteriolar hyporesponsiveness, reduction in perfused capillaries and venular inflammation [6, 7].  However, there is increasing evidence that elevated lactate in patients with septic shock is multifactorial. Pyruvate production and oxidation are infact greater in severely septic patients when compared to healthy volunteers, suggesting that tissue hypoxia plays only a minor role [8]. Adrenaline-induced ß2 activation is also likely to be involved in sepsis. Activation of ß2-adrenoceptors activates of Na+/K+ ATPase, a transmembrane protein that hydrolyses ATP to ADP in order to balance sodium and potassium concentration gradients. The ADP accumulation stimulates phosphofructokinase activity, resulting in increased glycolysis and lactate accumulation [9,10]. Idiopathic pyruvate dehydrogenase (PDH) impairment also plays a role in hyperlactataemia of sepsis [11], which may in some cases be compounded by PDH impairment due to thiamine deficiency [12].

Decreased lactate clearance may occur in sepsis, both idiopathically [13] and as a result of pre-existing liver disease [14]. Lactate is an independent predictor of mortality in sepsis, with serum lactate ≥4mmol/L associated with 28-38% mortality [15,16]. Despite aggressive resuscitation of shocked patients, the subsets of patients who have persistently elevated lactate concentrations continue to develop multiple organ dysfunction and higher mortality [17]. There is no significant difference in measures of tissue oxygenation (VO2 and DO2) between survivors and non-survivors of sepsis [18], suggesting that lactate is better placed as a marker of overall prognosis rather than a marker of tissue hypoxia. Lactate clearance is also a useful marker of resolution in sepsis; high lactate clearance at 6 hours is associated with improvement in inflammatory markers, markers of organ dysfunction (including SOFA score) and overall outcome [19]. The Surviving Sepsis campaign guidelines currently suggest normalisation of lactate as a goal of resuscitation [20]. Elevated serum lactate may be caused by a wide variety of processes, and often many processes co-exist in one patient. With Sepsis-3, lactate will be used increasingly as a marker of prognosis in sepsis and septic shock, and it is important to consider that the hyperlactataemia (Table 1) in these cases is multifactorial in its aetiology. In patients with suspected sepsis and elevated lactate it is wise to consider co-existent causes of hyperlactataemia in order to improve patient outcomes; this is especially important in patients whose markers of sepsis are improving. 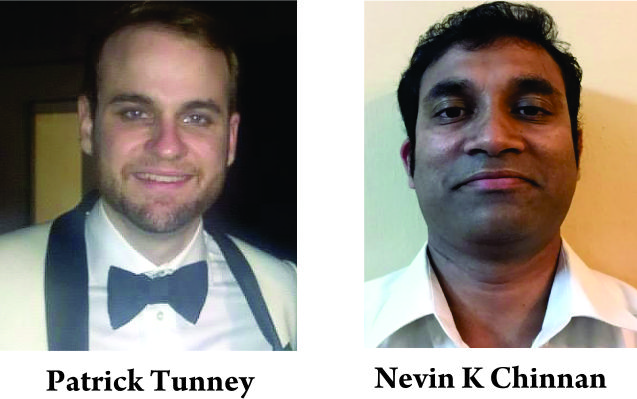