Intoduction: Infraclavicular blocks are been described long back but coracoid vertical approach is a relatively new approach. It has advantage of easily identifiable landmarks and easy to perform. This article focusses on the anatomical and technical issues and describes the procedure in details. .
Keywords: infraclavicular block, Regional anesthesia, Postoperative pain.

Infraclavicular blocks are been described long back but coracoid vertical approach is a relatively new approach. It has advantage of easily identifiable landmarks and easy to perform. This article focusses on the anatomical and technical issues and describes the procedure in details. The Infraclavicular approach was first described by Labat in 1922 [1]. The coracoid infraclavicular approach to neural blockade of the upper extremity provides several advantages as compared to axillary and supraclavicular brachial plexus block.  The anatomic surface landmarks are easy to identify, the head and arm may be in any position for the block, the technique is relatively easy to perform using either a nerve stimulator or ultrasound guidance. The coracoid infraclavicular technique, originally described by Whiffler in 1981 [2], has become popular because of relatively easily identified anatomic landmarks, reliable distribution of neural blockade, and low risk of respiratory complications, such as phrenic nerve blockade and pneumothorax [3].

Infraclavicular Anatomy
Below the clavicle the anterior divisions of the superior and middle trunks form the lateral cord. The posterior divisions of all 3 trunks form the posterior cord, and the anterior division of the inferior trunk forms the medial cord. The cords are according to their relationship to the axillary artery. They are all enclosed in well defined neurovascular sheath (Fig 1). Sheath enclosing brachial cordsThe cords pass over the first rib close to the dome of the lung and continue under the clavicle immediately posterior to the subclavian artery. The lateral cord branches into Musculocutaneous nerve (C4, C5, C6, and C7), Lateral root of the Median nerve (C5, C6, and C7), Lateral pectoral nerve (C5, C6, and C7). The Medial Cord forms the Medial root of the median nerve and continues as the ulnar nerve along the medial and anterior surface of the axillary artery. It also gives following branches – Median pectoral nerve (C8, T1), Medial brachial cutaneous nerve (T1) and Medial antebrachial cutaneous nerve (C8, T1). The Posterior cord gives following branches – Axillary nerve (C5 and C6), Radial nerve (C5, C6, C7, C8, and T1), Upper subscapular nerve (C5 and C6), Thoracodorsal nerve (C6, C7, and C8), Lower subscapular nerve (C5 and C6). The medial and lateral roots ( lateral cord ) join to form the the median nerve which continues along the posterior and lateral surface of the axillary artery. Axillary nerve:The axillary nerve supplies the shoulder joint, the surgical neck of the humerus, the deltoid, and the teres minor muscles before ending as the superior lateral brachial cutaneous nerve. The axillary nerve is separated from the cord close to the coracoid process. This is commonly encountered during the infraclavicular block. The radial nerve (blue ) continues along the posterior and inferior surface of the axillary artery.

Approaches to Infraclavicular Brachial Plexus
There are many approaches to the infraclavicular brachial plexus. Prominent of these are :
a. Raj approach to Infraclavicular [4]
b. Sims modification of Infraclavicular block [5]
c. Coracoid block [2]
d. Vertical Infraclavicular block [6-8]
e. Infracoracoid technique
At the point 2 cm medial and 2 cm caudad to the tip of the coracoid process, the direct posterior placement of a needle would contact the cords of the brachial plexus where they surround the second part of the axillary artery [9].
Technique: Coracoid infraclavicular
The patient lies supine with the head turned away from the arm to be anesthetized. The arm lies parallel to the trunk (adducted) and or is allowed to rest comfortably on the abdomen. This is particularly necessary in patients with forearm and elbow injuries.
The point of puncture is 2 cm medial and 2 cm inferior to the lateral tip of the coracoid process.
The needle was placed according to the anatomical landmarks mentioned and the pectoral flaps were reflected after careful dissection. The needle was in the perineural sheath [Fig 4]. 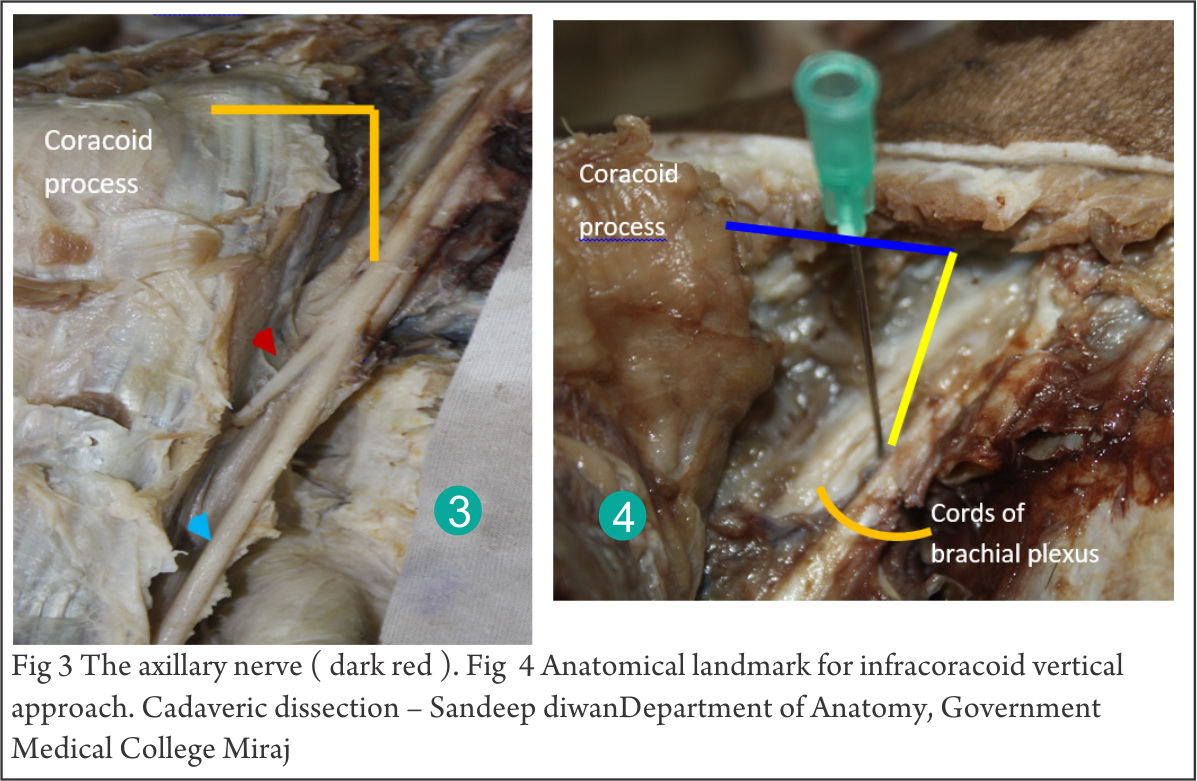 Contrast studies – Posterior cord stimulation
A posterior cord response was obtained with needle directed 30d cephalad after it was inserted vertical. Thoracic cavity Contrast injected takes a direction cephalad and caudad to needle insertion. Injecting 10 ml more in 5 ml aliquots more cephalad spread toward the supraclavicular area is visible. As the contrast and the drug are injected a more cephalad spread is identified.
The contrast reaches just below the clavicle with 5ml and with 10ml a well defined railway track appearance is observed with the spread in the supraclavicular area (Fig 11 and 12).
The CT contrast depicts the flow of the drug across the perineural sheath (Fig 13). The spread is from the injection point both cephalad and caudad. Cephalad it reaches the interscalene area and the lower cervical roots and distally the axillary terminal nerves.

The spread is consistent with the description of the perineural sheath from the cervical roots to the axillary area (Fig 13 and 14).T 4
T 3 The spread of the contrast is shaped fusiform (Fig 14) with maximum dilatation at the point of injection and tapering towards ends (Fig 14). The infraclavicular area is a highly compliant space.
The single posterior cord neurostimulation depicting all three cords stained by the injected contrast (Fig 15).
The cords are depicted in relation to the axillary artery. Anterior is the lateral cord just below the pectoralis major and the minor (Fig 15). Superior is the medial cord and posteroinferior is the posterior cord (Fig 15).
Posterior cord stimulation allows the drug to be in the centre of the plexus in the infraclavicular area [13].
Contrast studies – Medial cord stimulation.
The needle is inserted vertical for the infraclavicular block. Note the needle tip deviation medially to elicit a medial cord response – flexion of the MCP and wrist joints. On injection, the contrast spread occurs more distally towards the axillary fossa (Fig 16). Though a small spread does occur proximally (Fig 17).
Optimal response.
In a prospective study [14,15] patients underwent emergency upper limb surgery using double stimulation infraclavicular block.
The success rate was 96% for the radial response group, 89% for the median response group, and 90% for the ulnar response group.
Note: Obtain posterior cord (radial response) for maximum efficacy of infraclavicular block. A medial cord response if obtained on first occasion, there is no need to search for the posterior cord response. At times a dual response is obtained (radial and median) with slight needle tip manipulations. 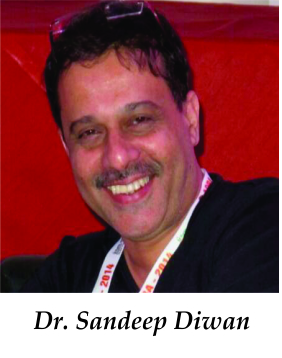