Laparoscopic surgeries are increasingly being performed in high-risk and emergency situations for benefits of fewer complications and shorter recovery times [1]. Advancement in surgical techniques and monitoring systems has led to a decline in absolute contraindications of laparoscopy. General anesthesia with muscle paralysis, endotracheal intubation, and intermittent positive pressure ventilation is the preferred choice of anesthetic technique for abdominal laparoscopic surgery [2]. Polymyositis, a rare, subacute, inflammatory myopathy characterized by symmetric, proximal muscle weakness and cardiopulmonary manifestations, raises several concerns for an anesthesiologist. Several authors have advocated avoidance of general anesthesia and muscle relaxants in such patients. We hereby report the anesthetic management of a female diagnosed with polymyositis, a drug defaulter, and scheduled for an emergency laparoscopic appendicectomy under general anesthesia.

A 23-year-old female, weighing 45 kg, a known case of polymyositis and hypothyroidism, presented to us with complaints of fever with chills, vomiting, and pain in right iliac fossa for past 4 days. She was taken up for an emergency laparoscopic appendicectomy. The patient had undergone a detailed workup for polymyositis 2 years ago when she had complaints of fever and proximal muscle weakness. Muscle wasting could be appreciated in both lower limbs (right more than left) (Fig. 1).

She felt pain in the popliteal region on getting up from sitting position and while walking. Later, she also had difficulty in deglutition, puffiness of face as well as pain in both knee joints. This was followed by upper limb and trunk weakness, rash on trunk, weakness of the neck and respiratory muscles, and difficulty in deglutition. Blood investigations revealed positive c-antineutrophil cytoplasmic antibody in a dilution of 1:101, raised creatine phosphokinase 765U/L, lactate dehydrogenase – 754U/L, and erythrocyte sedimentation rate of 53 mm/h. Electromyographic (EMG) study revealed the mild myopathic pattern. Twodimensional echocardiography and chest X-ray were normal. These findings were confirmed by muscle biopsy which showed evidence of inflammatory myopathy. MRI scan of the right knee was suggestive of gastrocnemius muscle strain with edematous changes and minimal fluid in fascial planes and mild focal marrow edema in anteromedial aspect of the tibial plateau and medial condyle (Fig, 2 and 3). 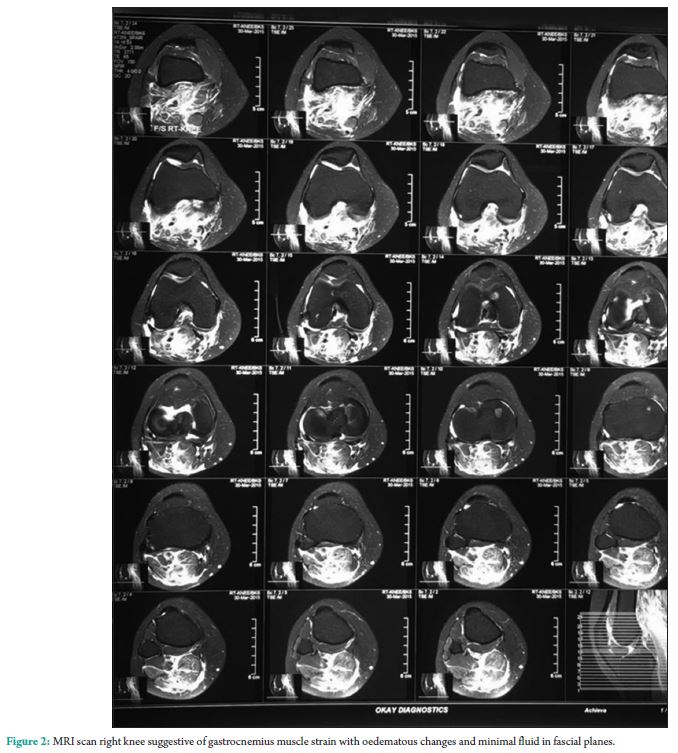 On examination, there was no facial asymmetry. Muscle power in upper and lower limbs: proximal: 3/5 (bilaterally) and distal: 4/5 (bilaterally). Trunk weakness was present. Plantar reflexes were flexor. Deep tendon reflexes and sensations were normal. She had been taking prednisolone; azathioprine; thyroxine; and analgesics, which she had stopped by herself 2 months ago and was on ayurvedic medication. At present, she was euthyroid. Contrast-enhanced computed tomography of the abdomen revealed a dilated tubular structure, measuring approximately 8 mm at ileocecal junction in the right iliac fossa suggestive of appendicitis. On complaint of severe abdominal pain, high-risk informed consent was sought from the patient and relatives, and she was immediately shifted to the operating room. Standard anesthesia monitors including electrocardiogram; non-invasive blood pressure; pulse oximeter and temperature, as well as specific monitors; bispectral index (BIS); and neuromuscular monitor were applied to gauge the depth of anesthesia and muscle relaxation, respectively. Anesthesia was induced using propofol 90 mg; midazolam 1 mg; fentanyl 50 mcg; and atracurium 15 mg to obtain a train of four twitch response of 1. Depth of anesthesia was maintained at a BIS value of 40-60. Intraperitoneal CO2 insufflation pressure was maintained between 12 and 15 mmHg. The patient was maintained on a mixture of air-oxygen (1:1) and propofol infusion at 40 mg/h while maintaining an appropriate depth of anesthesia. Approximately, after 25 min of induction, a single top-up dose of 5mg of atracurium was given when twitch response was 2. Peak airway pressures ranged from 30 to 35 cm of H2O owing to steep Trendelenburg position. There was no hemodynamic instability or any other adverse event. Surgical procedure lasted about 30 min. Patient was reversed with neostigmine 2.5 mg and glycopyrrolate 0.4 mg and extubated after obtaining a twitch response of 4 and a BIS value of 80. There was no extubation delay or residual muscle weakness and desaturation. Post-operatively, she was given intravenous diclofenac 75 mg 8 hourly for analgesia. She was discharged on the fourth post-operative day. 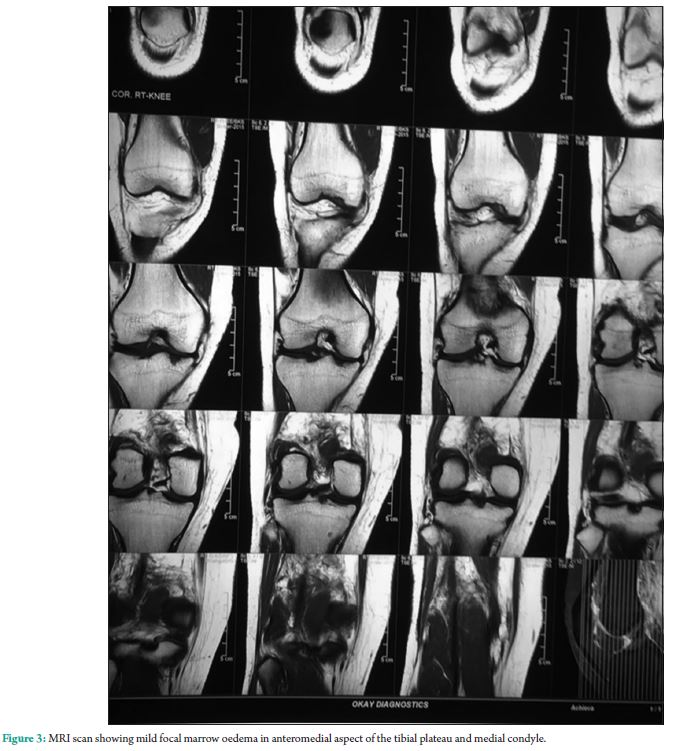 Patients with polymyositis present with symmetrical, proximal muscle weakness raised skeletal muscle enzymes, abnormal EMG, and inflammatory cell infiltration in muscle tissue. The incidence is 2.4-10.7 cases per 100,000 persons in general population [3]. Muscles involved include those of the neck, shoulder, and pelvis. In addition, pharyngeal, diaphragmatic, and intercostal muscles may also be affected leading to dysphagia, pulmonary dysfunction, and aspiration [4]. Cardiac involvement may result in atrioventricular conduction defects, arrhythmias, cardiomyopathy, and a compromised ventricular function [5]. These patients are treated primarily with corticosteroids and immunosuppressants such as azathioprine and cyclosporine [6]. Anesthetic challenges for consideration include increased sensitivity to non-depolarizing muscle relaxants, malignant hyperthermia with succinylcholine and volatile anesthetics, pituitary adrenal axis suppression, skeletal deformity with restricted mobility of temporomandibular joint and cervical spine, and impaired temperature regulation [6]. Advancements in surgical techniques and equipment have widened the spectrum of laparoscopic procedures, especially in an emergency setting. Laparoscopic intervention has been established as a treatment of choice for acute appendicitis. A systematic review of 54 randomized studies with a population of 5000 patients reported a decrease in the incidence of wound infection to about 50% and hospital stay to about 1.1 days in laparoscopic appendicectomy [7]. There are several case reports on management of these patients under regional and general anesthesia. However, they were all electively performed surgeries with patients on regular drug treatment. Our patient had stopped medical treatment 1 month ago against medical advice. She had to be taken up as an emergency laparoscopic surgery which further compounded the anesthetic challenges. We preferred giving general to spinal anesthesia as our patient was very apprehensive. Surgical preference was to have an adequately relaxed patient to avoid any inadvertent bowel injury as it was an emergency laparoscopic surgery with anticipated technical difficulty. In addition, this procedure required greater head-low tilt, which would increase chances of aspiration. Tiwari et al. and several other studies have reported greater procedural complexity and longer surgical time under spinal anesthesia owing to low intra-abdominal pressure [8, 9, 10]. Sinha et al. retrospectively reviewed 4645 patients operated laparoscopically under spinal anesthesia of whom 18.21% patients had hypotension and 12.29% complained of shoulder tip pain [11].  Although laparoscopic appendicectomy is feasible under spinal anesthesia, safest option despite its potential hazards in patients with polymyositis remains general anesthesia with endotracheal intubation as it allows good control over airway and ventilation, thereby preventing aspiration and several undesirable side effects of the former [12]. Beleña et al. found that laryngeal mask airway with drain channel provides adequate ventilation for laparoscopic cholecystectomies [13]. However, there is  limited evidence regarding the safety of supraglottic devices against aspiration. Supraglottic devices are safe only in non-obese patients requiring low-abdominal pressure surgery with mild head tilt [12]. Although in patients undergoing laparoscopic surgery, propofol total intravenous anesthesia (TIVA) reduces post-operative nausea and vomiting (statistically insignificant) and duration of postanesthesia care unit stay, it not only adds to the cost of anesthesia but also increases chances of awareness [14]. Shikha et al. have described the anesthetic management of two patients scheduled for laparoscopic cholecystectomy. They avoided the use of a muscle relaxant in their previous patient at the time of anesthetic induction but following pneumoperitoneum there was a sudden rise in peak airway pressure which necessitated the use of relaxant. In their second patient, they administered muscle relaxant at induction following which the airway pressures were normal after insufflations [15]. In another interesting case report by Carron et al., rocuronium was administered to a patient with Sjogren’s syndrome with polymyositis undergoing laparoscopic sigmoid resection for diverticulitis. They maintained moderate-to-deep neuromuscular blockade guided by neuromuscular monitoring (post-tetanic count of 1-5). After rocuronium was discontinued, a complete reversal was achieved with sugammadex within 90 s. There was no residual block in the post-operative period [16]. Kushikata et al. used TIVA with titrated doses of vecuronium for a patient with mitochondrial myopathy undergoing laparoscopic cholecystectomy [17]. Suzuki and Aoyagi have reported a slow onset of action of rocuronium as well as reversal of its neuromuscular blockade by sugammadex in a 75-year-old patient with dermatomyositis for open reduction of elbow fracture [18]. Ganta et al. maintained their patient of acute polymyositis for partial laryngectomy on an infusion of atracurium with neuromuscular monitoring. Patient recovery was satisfactory [19]. Saarnivaara has described a normal response to vecuronium in a patient with polymyositis undergoing myomectomy of cricopharyngeus muscle under thiopentone, alfentanyl, and nitrous oxide-oxygen anesthesia [20]. We avoided the use of succinylcholine and volatile anesthetic agent, a combination known to trigger malignant hyperthermia and dangerous hyperkalemia [6]. However, Khan et al. anticipating a difficult airway in their patient used succinylcholine for intubation followed by atracurium for maintenance. The patient recovered uneventfully [21]. Some authors have advocated complete avoidance of muscle relaxant. Fujita et al. have described anesthetic management for colonic resection under epidural anesthesia [22]. Ohta et al. avoided muscle relaxant for endotracheal intubation and maintenance of anesthesia in their patient for tympanoplasty [23].

General anesthesia poses several challenges to the anesthesiologist in patients with polymyositis including increased sensitivity to muscle relaxants. However, in certain situations such as emergency laparoscopic surgeries, general anesthesia with muscle relaxants is inevitable and should be the norm. Availability of newer short-acting intravenous anesthetic agents, opioids, and non-depolarizing muscle relaxants with concomitant monitoring of anesthetic depth and neuromuscular blockade have enhanced safety and recovery in this subset of patients.