Appropriate airway management is an essential part of anaesthesiologist’s role. Huge goitres can lead to distorted airway and difficulty in endotracheal intubation. In this report, we present a case of a 56-year-old woman with a huge multinodular thyroid swelling, gradually increasing in size for last 15 years, where trachea was successfully intubated in awake state using Airtraq. She was diagnosed to be hypertensive since 7 years and was on medication. She had no history of change in voice. She was diagnosed a case of multinodular goitre(MNG), advised surgery, and was admitted for the same.
Keywords: Difficult airway,Airtraq guided awake intubation, huge thyroid, obese patient.flexometallic tube.

Enlarged thyroid gland can lead to compromised airway with difficulty in tracheal intubation. Amathieu et al. reported that the overall incidence of difficult intubation in thyroid surgery was 11.1%. Airtraq intubation has been reported successfully in patients with enlarged thyroids in a difficult airway situation. [1],[3] We present one such case of successful awake intubation with help of Airtraq using ventilating bougie technique in a female patient with huge goiter.

A 56 year old female with bilateral thyroid swelling admitted in general surgery for total thyroidectomy. History dated 15 years back when she had small swelling in front of neck which enlarged over a period of time to huge size 30 cm × 15 cm × 10 cm. She developed history of episodes of breathlessness intermittently since last 3 months on lying supine. She had history of Hypertension since last 7 years controlled with tablet Olmesartan 40 mg once daily. Body mass index was 38kg/m2. Her thyroid size was 30 cm × 15 cm × 10 cm. Airway examination showed adequate mouth opening (3 fingers), Mallampati grade-II and short neck, normal neck movements, no loose, malformed & absent teeth. On examination her pulse rate was 88/Min, BP- 144/84 mmHg, with all other systemic examinations were within normal limit. Investigations were Hb-13.2gm%, TLC-8400/cmm, platelets were 2.3 lacs/cmm with PT-13.2/15 seconds and INR-1.1. Thyroid function tests were T3-203.71ng/dl, T4-7.3mcg/dl and TSH-1.47mcgIU/ml. All other haematological and biochemical tests were within normal limit. X-ray neck lateral shows large pre& para-tracheal mass with calcification suggestive of Multinodular goitre causing mild to moderate compression of trachea. ENT opinion with indirect laryngoscopy shows bilateral mobile cords with incomplete view.

Anaesthetic Management
Awake orotracheal intubation was planned as patient had history of dyspnoea on lying supine for more than 30 seconds and on indirect laryngoscopy incomplete cord view as only posterior commissure was seen. Informed consent was taken from patient after informing risk securing airway for anaesthesia. ENT specialist with rigid bronchoscopy and jet ventilation were kept ready. Patient was taken inside operating theatre and monitors like ECG, pulse –oximetry, NIBP attached. Then 16 G vein was secured on left upper limb. Lignocaine 1:400000 nebulization was given and lignocaine 2% gargle was given half hour before the procedure. 10% lignocaine spray given just before airway handling. Patient pre-oxygenated for 3 mins. After anaesthetizing the airway check laryngoscopy with AIRTRAQ was done but within 2 seconds field becomes blurred due to fogging of lens. Patient was again made to sit up, oxygenated and explained to hold the breath as long as she could. With repeat check scopy by Airtraq airway grading Cormack-Lehane grade-2 was seen. After this ventilating bougie was passed beyond vocal cords under AIRTRAQ guidance & 4% lignocaine was sprayed through the bougie. Then Airtraq was removed & with routine laryngoscope 30 Fr Armoured Endotracheal tube was passed over the bougie guided by Magill’s forceps beyond the cords as it is difficult to pass armoured tube through Airtraq because of its floppiness. Post intubation bilateral air entry was checked but it found to be endobronchial so tube was withdrawn till air entry was bilaterally Succinylcholine was given then cuff inflated, circuit attached, ventilation checked, chest rise and capnograph noted. Tube was fixed at mark 24.After this patient was induced with Propofol 100mg, Succinylcholine 75 mg, Midazolam 1 mg, Fentanyl 100mcg and put on controlled ventilation.Succinylcholine was given as it is short acting relaxant and there remains risk of accidental extubation with Armoured tube while positioning the patient and keeping in mind the difficult airway, so we ventilated initially with relaxation under succinylcholine.Ryles tube no 16 was passed nasally and throat packing was done. Long acting muscle relaxant was given. Patient tolerated the procedure very well.
Total thyroidectomy of multinodular goitre was performed. Patient remained hemodynamically stable. As a team we were concerned about tracheomalacia so after patient was fully awake and breathing spontaneously tracheal tube cuff was deflated and leak test was performed. Leak was demonstrated around tracheal tube after deflation, so it was considered safe to extubate patient [5]. A trolley for emergency intubation with rigid bronchoscope was kept ready. Then ventilating bougie was passed through tracheal tube and patient was extubated with bougie in-situ. After vocalization & adequate breathing effort bougie was removed.

Appropriate airway management is an essential part of the anaesthetist’s role. Airway difficulties are complicated by obesity, a short neck, thyroid swelling or a laryngeal mass. Sharing of the airway with surgeons, as in ENT procedures, makes the tasks more challenging [6]. A strategy needs to be developed in order to anticipate and manage patients with difficult airways. This includes identifying the potential problem, considering different options, and selection of an appropriate plan in the particular scenario of the individual patient. Regular and ongoing discussions with the surgeons regarding the plans are also important. The patient should be informed about the options and the advantages and disadvantages of each. Finally, there should be alternative plans in case of failure of the initial one. Difficulty with intubation may be caused by an enlarged thyroid gland producing tracheal deviation, compression, or both[2]. Amathieu et al. concluded that classical predictive criteria like mouth opening <35 mm, Mallampati III or IV, limited neck movements <80°, and thyromental distance were reliable predictors of difficult airway.[3] Induction of general anaesthesia in such cases could be risky because it may precipitate complete airway closure and make mask ventilation and tracheal intubation nearly impossible [7]. Pressure on trachea exerted by a long-standing neck mass could have caused laxity to the parts of tracheal wall, which can lead to complete collapse of the airway with muscle relaxation.Airtraq, which can safely and promptly secure the airway, can be a good alternative for the airway management in patients with difficult airways. In our case, there was history of breathlessness on lying supine for more than 30 seconds, patient had short neck and was obese.Airtraq is an intubation device used for indirect (video or optic assisted) tracheal intubation in difficult airway situations[1]. It is designed to enable a view of the glotticopening without aligning the oral with the pharyngeal, and laryngeal axes as an advantage over direct endotracheal intubation and allows for intubation with minimal head manipulation and positioning[4]. We have given alternative to fiberoptic intubation as in Hariprasad and Smurthwaite et al who used fiberoptic bronchoscope for large thyroid patients in awake state. So Airtraq can be good alternative to fiberoptic bronchoscope where there is no availability of same. Since fiberoptic bronchoscope is most commonly used device for securing airway in difficult airway scenario and use of Airtraq will need time to get used to it.

In conclusion, awake intubation using Airtraq technique can be a good alternative or viable option in selected group of patients having compromised airway. Preoperative airway assessment could predict patients with possible difficult airway. Proper planning and discussing the problems with the patient and surgeon are important for safe outcome. 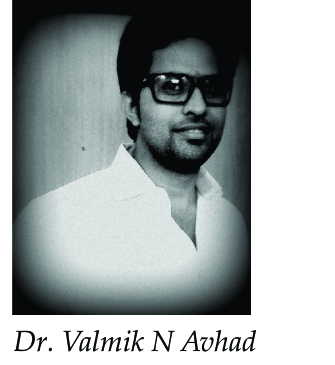